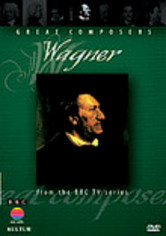 1997 NR 0h 59m DVD
Prominent German composer and master of opera Richard Wagner's controversial personal life was strongly affected by his anti-Semitic sentiments, which some have speculated are coded within his music. Filmed in Switzerland, Italy and the Bavaria of King Ludwig II, this documentary explores Wagner's techniques and features performers such as Daniel Barenboim, Roger Norrington, Siegfried Jerusalem, Deborah Polaski and many more.