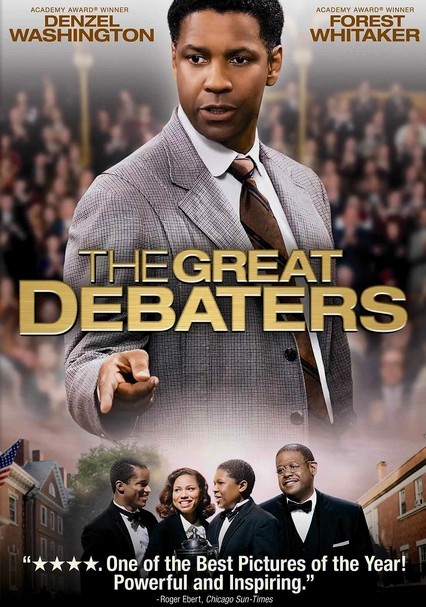 2007 PG-13 2h 4m DVD
At all-black Wiley College in 1935, an activist professor pushes his debate team to a level of excellence that nets them a chance to take on Harvard University -- the reigning national champs -- in this inspiring drama based on a true story.

Parents need to know that this inspirational fact-based drama includes unvarnished discussions and representations of 1930s racism, including a brutal lynching scene (the victim's body is shown burned and hung). There are also a couple of fight scenes, a confrontation between rural white bullies and an African-American professor, and a scene in which a bloodied, beaten African-American prisoner has been abused by white sheriff. A sex scene is brief and romantic (no graphic images). Language includes repeated uses of "hell" and the "N" word. Some drinking and pipe-smoking.

Henry flirts with a man's wife at a bar; women appear in close-fitting dresses, showing cleavage, sweating, and dancing suggestively. In a later scene, James watches Sam on dance floor and imagines dancing with her and her kissing him (sweetly). On a boat, Sam and Henry kiss; scene dissolves to sex in bed (romantic filtered light and close-ups). Henry kisses a girl he's picked up at a bar in front of Sam (it upsets her).

A central scene shows a lynching, with a burned, hanged African-American body and white lynchers (including a white child watching, undisturbed); the African-American debate team observes in horror, then drives away afraid. Early violence includes a bar fight. A car hits a hog, leaving it bloody and dead; the white men who own it threaten the African-American driver and his family. James finds Tolson at a union meeting; white men arrive with sticks and farm tools, chasing the farmers away, and Tolson leads James to safety. Prisoner held by sheriff appears with bloody, swollen eye. Henry and James fight briefly (Henry tells him that lynchers "cut your privates off" and "skin you alive").

Includes several uses of "hell" and the "N" word -- the latter both by racist characters and by Tolson, who uses it repeatedly during one "lesson" directed at Henry. Drunk and upset, Henry sings a song with the chorus "Run, n---er, run."

Debate team members are mostly determined and noble, though occasionally rebellious and raucous. Racists (including lynching party and the sheriff in Marshall) are especially villainous. Coach is complicated and smart.

Drinking and drunkenness in bars (Henry is involved in these scenes). Henry, upset by the lynching, goes out drinking and comes home drunk. Tolson smokes a pipe.