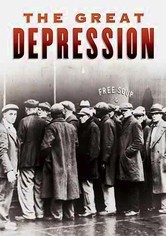 2009 NR 3h 20m DVD
Revisit the Great Depression in this four-part series that chronicles the forces that drove the United States to the brink of economic ruin and the resilience that helped the country recover. The film examines the mass exodus from dust bowl farms, President Roosevelt's New Deal, the emergence of the popular media as a source of escapism, the building resentment of average Americans and how World War II hastened the end of the financial crisis.