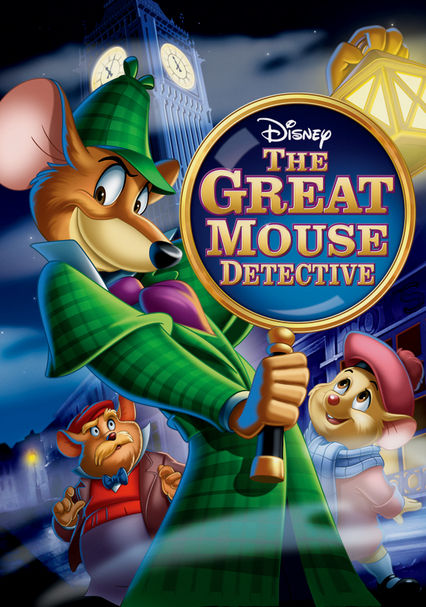 1986 G 1h 14m DVD
Based on the novel &NFiBasil of Baker Street&NFi_;, this film follows crime-fighting mouse Basil and his sidekick, Dr. Dawson, as they help a toymaker who's been kidnapped by the evil Ratigan. The duo traps Ratigan, but are they in time to stop his evil plan?

Parents need to know that The Great Mouse Detective is a Disney tribute to Sherlock Holmes that has potentially frightening themes such as kidnapping, blackmail, and world domination. Although it's rated G, it does feature a menacing evil genius who wants to kill the reigning Mouse Queen and uses his creepy henchman bat to commit crimes. There are also a couple of cartoon-violence scenes (a pub brawl and a climactic duel) and notable drinking/smoking scenes. But for young tweens -- especially those interested in detective mysteries -- this should be a fun bet.

An evil rat acts menacingly throughout the movie: He kidnaps a father mouse, threatens him, and then kidnaps his young daughter. A henchman bat can be quite creepy. A cat eats a mouse, and there's a pub fight and final duel between two central characters.

Basil's smarts defeat Ratigan's greedy plans. Self-sacrifice and courage are rewarded in the end, and the villains get their due comeuppance. Olivia and her father work as a team.

Rodent characters drink/get tipsy in two scenes -- the first near the beginning of the movie when the bad guys are making their evil plans and the second toward the end (takes place in a bar). The villainous rat smokes a cigar; lead character Basil also smokes. A tipsy Watson ogles a burlesque dancer.