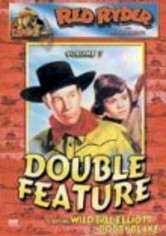 2004 NR 1h 56m DVD
In The Great Stagecoach Robbery, Red Ryder tries to dissuade a wayward young man from following in his outlaw father's footsteps. Then, in Phantom of the Plains, Red steps in to protect his aunt, who's at risk of getting swindled in the name of love. Bill Elliott is in the saddle as the legendary Wild West hero -- with Robert Blake reprising his role as trusty sidekick Little Beaver -- in this twin bill of action-packed adventures.