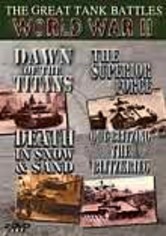 2001 NR 2 discs
In four thrilling segments, this two-disc set tells the thundering story of the most dramatic armored vehicle showdowns in World War II history. Early in the conflict, the seemingly unstoppable Nazi Panzers held the power, but Allied tanks such as the Soviet T-34 and the British Matilda II eventually gained the upper hand. And Gen. George Patton's superior firepower ultimately sealed the fate of the Axis forces.