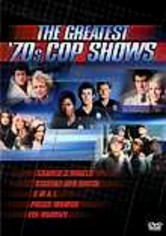 2003 NR 4h 12m DVD
Ten-four! Relive your youth courtesy of five of the most popular cop shows from 1970s American television: "Charlie's Angels," "Starsky and Hutch," "S.W.A.T.," "Police Woman" and "The Rookies." Each series is represented by one choice episode. Hunker down and spend some quality time with such stars as Angie Dickinson, Kate Jackson, Jaclyn Smith, Farrah Fawcett, David Soul and Paul Michael Glaser.