The Greatest Man in the World 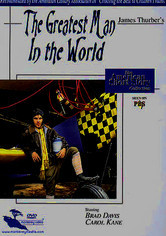 The Greatest Man in the World

1980 NR 0h 51m DVD
James Thurber's witty tale serves as inspiration for this PBS-produced film. Pilot Jack Smurch (Brad Davis) has all the makings of an American hero, having been the first man to fly around the world nonstop. But his image needs a little cleaning up, as he's prone to drink, dames and other damning deeds. When a reporter learns of his aeronautic feat, authorities have to scramble to dust off Smurch before he's ready for his close-up.