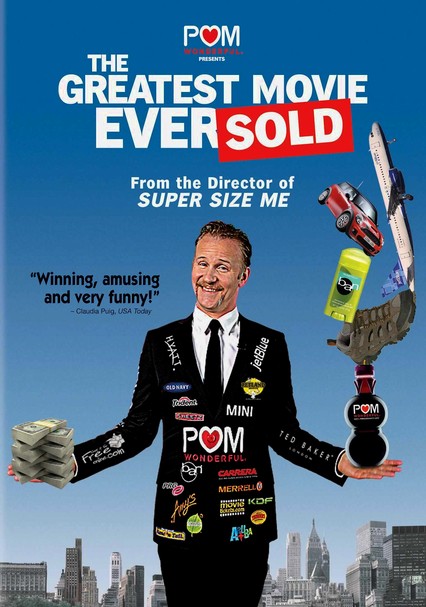 Parents need to know that this documentary from Super Size Me filmmaker Morgan Spurlock unmasks how companies push their brands by way of film and television product placements -- and how media companies work with them to raise money to get their projects made. It's an enlightening, exhilarating, and often hilarious look at the mechanics of consumerism and advertising that's likely to be a conversation-starter for teens and adults. Expect some swearing (including "s--t" and "f--k") and plenty of footage from commercials.

A quick scene in which a man envisions women's breasts under T-shirts to be of a different shape. Brief flashes of advertising images showing scantily clad women.

A few clips from action movies, though they're fleeting and not particularly violent.

Spurlock's goal is to point out that if you're watching a movie or a TV show (or pretty much enjoying any form of entertainment), chances are you're being sold something. Products are either discreetly or aggressively being pitched to you to get you to spend your money of them. And being aware of this may help empower you to be aware of exactly what companies are doing to influence your purchases.

The movie is intentionally inundated with products, including Sheetz, Mane 'n Tail, Burger King, JetBlue, Nike, Ben & Jerry's -- you name it, it's probably here. And of course, the movie itself is a product, with beverage manufacturer POM as a title-placement-earning sponsor. But the film is transparent about the ways that these products are sold to viewers, even as it's happening on screen.