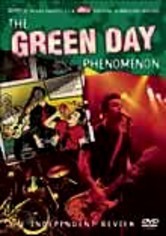 2005 NR 1h 11m DVD
Find out how teen rebels Billie Joe Armstrong, Mike Dirnt and Tre Cool became punk superstars with this unauthorized look at the Green Day phenomenon. From their early days shaking up San Francisco's underground clubs to their Grammy-winning 1994 album, "Dookie," this independent review chronicles the band's highs and lows, digs into their creative process and hit singles and reveals the secrets behind the group's phenomenal success.