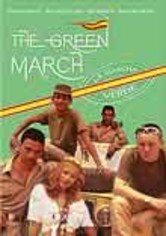 2002 NR 1h 25m DVD
In the 1970s, Spain and Morocco tussled over a section of the Sahara controlled by Spain. Instead of marching troops into the territory (and heightening the tension), the King of Morocco sent a group of civilians to occupy the land in a canny maneuver dubbed "The Green March." The group was led by a troupe of performers, and, oddly, the Spanish soldiers joined in the spirit of the fun. José Luis García Sánchez directs this version of the events.