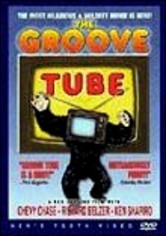 1974 R 1h 14m DVD
Compiled by director Ken Shapiro and amalgamated as programming for a fictitious network, this riotous collection of skits -- which mocks television and its trappings, from kids' fare to commercials -- was released to theaters as a full-length film. Classic bits include a children's show in which pot-smoking host Koko the Clown reads lewd passages from literature, and a public service ad with a talking penis discussing the perils of casual sex.