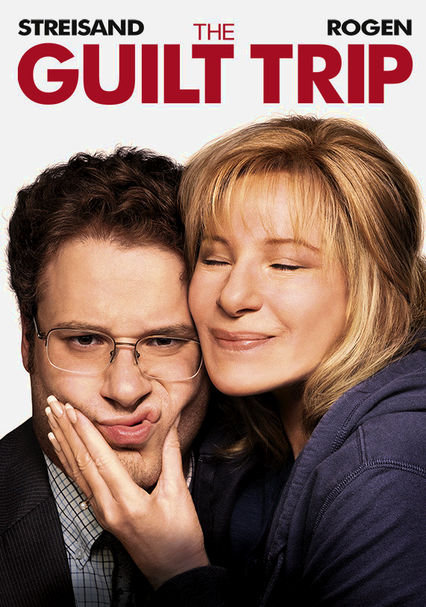 2012 PG-13 1h 36m Blu-ray / DVD
After Andy Brewster invents a fabulous new organic cleaner, he goes on a cross-country road trip to promote it. His mother, Joyce, comes along for the ride but soon discovers that her son has an ulterior motive: fixing her up with a long-lost flame.

Parents need to know that The Guilt Trip is a mother-son comedy that occasionally includes some mature language, humor, and themes. The strong language is occasional but does include one "f--k" and several uses of "s--t," "ass," "damn," and more. There's some mention of sexuality and dating, as well as a couple of brief instances of Joyce (Barbra Streisand) flirting on the road. Because of the nature of Andy's (Seth Rogen) job, he visits the headquarters of many real companies, including Ace Hardware, Costco, Home Shopping Network, and Kmart. In one scene, Andy gets into a brief fist fight with a man trying to give his already-drunk mom another drink. Ultimately the movie's message is that mothers and sons may not always get along, but they should love and respect each other unconditionally.

Andy watches in amusement as a wealthy Texan flirts with his mother and asks whether he can take her out on a date back in New York City. Andy and Joyce discuss how she told him about sex and then what his penis looked like when he was a baby. Joyce plays audiobooks in the car that are a little sexually explicit, but Andy shuts them off once they start getting too racy. Andy and Joyce stop by a strip bar, and viewers can see women dancing in the background.

Defending his drunk mom's honor, Andy punches a cowboy suitor in the face and then gets punched in the eye in response. Joyce warns Andy not to pick up any hitchhikers, because they "rape."

The movie's ultimate message is to honor your parents and not take them for granted. The road trip proves that even when your mom drives you crazy, she's still deserving of respect and usually has your best interests at heart.

Since Andy is pitching a cleaning product to various companies, viewers see the logos and facilities of various stores, including Ace Hardware, Costco, Kmart, and the Home Shopping Network. The road trip is done in a small Chevy Aveo, and they listen to the audiobook of Oprah's Book Club novel Middlesex by Jeffrey Eugenides. Joyce has a nightly routine of eating M&Ms and is obsessed with the Gap. Andy wears a J Crew suit to his meetings.

Joyce drinks to excess in Texas and then recreationally in Las Vegas. Andy drinks in anger after a week of frustration.