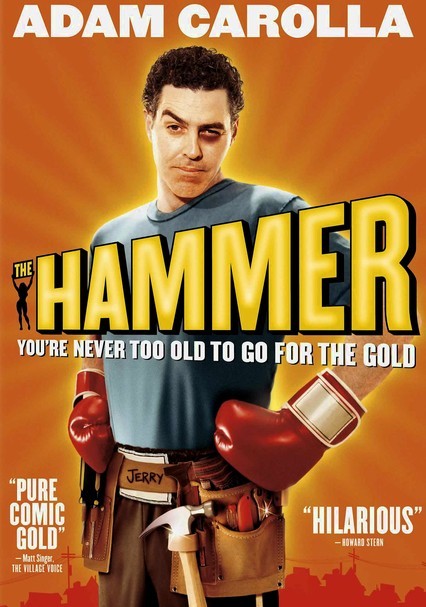 2007 R 1h 28m DVD
An aging boxer (Adam Carolla) turned construction worker dons his gloves again two decades after stepping away from the ring in a bid to win the prize he had been unable to attain before, a berth on the U.S. Olympic Boxing Team. Years past his prime, the onetime up-and-comer struggles in the ring and out as the boxing establishment doubts he can pull off a comeback in this sly comedy from director Charles Herman-Wurmfeld.

Parents need to know that, like Billy Elliot, this is a film full of strong language that their kids have probably already heard elsewhere -- and a positive message that they should hear, too. Most of the movie's violence is in the context of boxing, which is depicted without glamour or gore as an athletic competition with rules and regulations. There's some drinking and kissing, but really the main content issue here is the language. That said, while the language is rude and pervasive (expect everything from "f--k" to "gay" and more), the film's characters and message -- work hard for your dreams -- are surprisingly positive.

Discussion of the idea that boxers should abstain from sex during training; some joking references to sexual potency (here called "chi"). Some kissing as part of a romantic relationship. The affection and care between Carolla and Juergensen's characters is a real part of their relationship.

Many boxing matches, including knockouts; some blood and bleeding. Outside of the ring, an angry man takes swings at a dodging Carolla, and one punch is delivered to a deserving bully's jaw. The delineation between the athletic pursuit of boxing and fighting outside the ring is clear.

A clearly racist bully refers to Nicaraguan characters as "beaners" and "wetbacks." A discussion of "going Dutch" for a date leads to a riff about how the Dutch "must be cheap bastards if that what's they're known for." Brief contextual discussions of the difference between Caucasian and African-American athletes. Carolla's character's work to make it to the Olympic boxing trials is shown in detail, and the effort required to fulfill that dream (impractical as it may be) is evident throughout.

Some logos visible, including Mikita power tools, Tecate beer, and Orchard Home Supply, as well as Everlast and other athletic equipment suppliers.

Some discussion of "crack whores" and "methheads" Carolla's character drinks to excess one time, with clear and vulgar ramifications (hangover-induced vomiting).