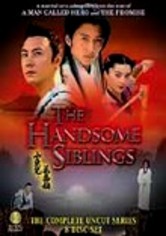 2004 NR 8 discs
Recent friends Yu and Fa have no idea they're actually twin brothers separated at birth. Raised and trained by rival kung fu masters, they slowly come to realize that they are but mere pawns in a game orchestrated by their stepfathers' old rivalry. But when a concentrated threat to the martial arts world erupts, the siblings must unite to confront an unbeatable foe. Pop icons Nicholas Tse and Dicky Cheung star in this lavish martial arts epic.