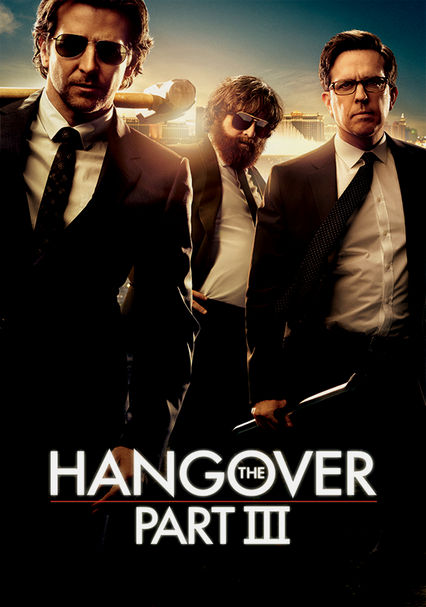 2013 R 1h 40m Blu-ray / DVD
Capitalizing on the success of two previous Hangovers, Phil and the boys set out on another road trip and soon find their plans reduced to chaos. Before the dust settles, the gang will have to figure out how to rescue Alan from a mental hospital.

Parents need to know that while The Hangover Part III deviates from the structure of the first two installments, it doesn't skimp at all on the over-the-top, R-rated raunch that defines the franchise. After a harrowing kidnapping, Phil (Bradley Cooper), Stu (Ed Helms), and Alan (Zach Galifianakis) stumble into all manner of mishaps trying to rescue their pal, Doug (Justin Bartha). Expect tons of strong language ("f--k," "s--t," and more), violence (guns, knives, animal cruelty), danger, alcohol and drug use, and sexual content (including scenes that show bare breasts and male genitals). While perhaps not quite as over the top as the last installment, this is still iffy for anyone except the most mature teens and adults.

Many sexual references/suggestions. A few scenes feature brief glimpses of women in their underwear/possibly topless. Characters imitate masturbation/ejaculation. Sex talk/references. A flirtatious/sexual scene involving a lollipop. One character is a retired stripper. One unusual scene includes bare breasts and a naked man running around, his penis fully exposed.

Violent content includes a harrowing carjacking/kidnapping and several scenes in which criminals brandish handguns. Gangsters callously shoot each other and attack people with knives. Several men attempt to drug and abduct another man. Punching, falling off buildings, etc. Several scenes show people being cruel to animals, including a giraffe that meets a very unpleasant (and undeserved) end.

Friendship is the franchise's underlying theme, but there's a conflict between the message to be true to your friends (especially when they're in trouble and need help) and the fact that loyalty leads people into dangerous situations.

Several well-known car brands are visible, including Mercedes-Benz, Toyota, and Maybach. A character prefers Tab sodas, and several of the guys like Dos Equis beer. Many famous Las Vegas hotels are shown prominently as the characters drive through the town, and an important scene is staged at Caesar's Palace.

Characters drink beer and wine in bars and at meals in several scenes. Some people also smoke cigarettes; one smokes a cigar. While no drug use is shown, several sequences have strong drug references (especially to cocaine) -- and the whole premise of the Hangover franchise is people getting drugged and forgetting about their actions.