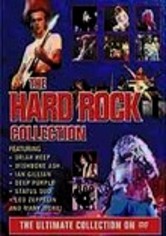 2006 NR 1h 16m DVD
From Uriah Heep to Black Sabbath, all the overamped, over-the-top hard-rock gods from the 1970s are represented in this anthology of some of the rawest, most rollicking performances of the era. Power and melody combine as Asia, Saxon, Deep Purple, Jack Bruce and other hard-rock legends perform in front of packed houses the world over. The video also features a rare performance by progressive German band Nektar.