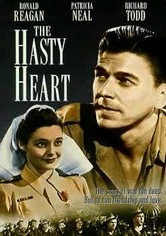 1949 NR 1h 42m DVD
At the end of the war, Scottish Cpl. Lachlan MacLachlan (Richard Todd) is detained in a military hospital on account of a lower-back wound. Unaware that his injury is fatal, the prickly patient is befriended by an American GI (Ronald Reagan) and a compassionate nurse who are adamant about hiding the news of his impending death. But when the secret comes out, MacLachlan must either embrace friendship or succumb to bitterness in his final days.