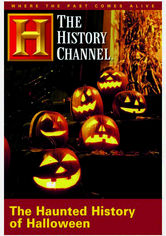 1997 NR 0h 50m DVD
This exploration of one of America's most popular holidays, Halloween, is truly a treat for history buffs. Pagan in origin, October 31 festivities have been observed for centuries, celebrating mystery, chaos and the zone between life and death. Ghouls, ghosties, jack-o'-lanterns and, of course, the trick-or-treat tradition all get their due in this fiendishly fascinating look at the spookiest night of the year.

Parents need to know that this series -- which looks at historical figures, places, and events and their relationship to hauntings and other creepy phenomena. -- may be too scary for younger and/or more sensitive viewers. Most episodes include reenactments of violent murders and/or tragic accidents, but no real blood is shown. Superstitions and various rituals are discussed, and some reenactments include drinking and and cigarette and cigar smoking.

Some of the featured ghostly legends note that the "love of a good woman" is what's necessary to help those who haunt move on.

The show features reenactments of violent murders (like people being killed with hatchets), suicides, and accidental deaths (like a child falling to his death), but no blood is shown. Some legends claim that the victims eventually become ghosts and/or that murderers are targeted by phantom beings.

Overall, the show is educational, offering insight into the belief systems and rituals of different cultures. That said, many of the stories are steeped in superstition.