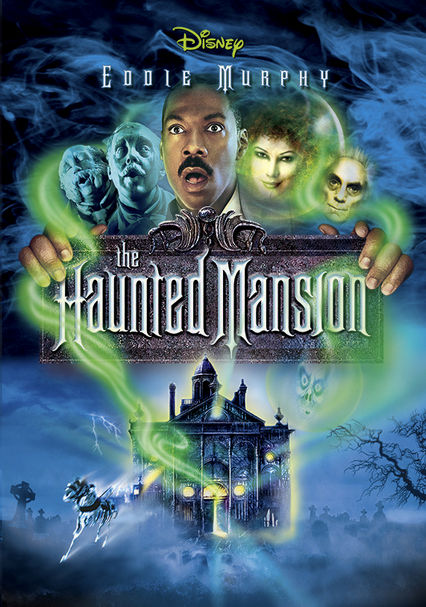 2003 PG 1h 28m DVD
When Jim Evers and his wife, Sara, and son Michael encounter a ghost while visiting a haunted house during a job interview, Jim gets a crash course in family values -- and the importance of maintaining them!

Parents need to know that The Haunted Mansion is a 2003 movie starring Eddie Murphy as a real estate agent and father of a family who ends up trapped in an old estate filled with ghosts, demons, and zombies. There are many chase scenes involving peril to young kids; these, and the atmospherics of the crypt scenes, might scare younger viewers. The mother of the movie is told she committed suicide in a past life, and this moment is interspersed with the quick image of a woman hanging dead from a noose. A ghost is dragged into a fiery pit while other ghosts dematerialize to ascend into the heavens. Younger children might be scared when the parents are threatened. Eddie Murphy's character makes reference to a ghost trying to "get jiggy" with his wife. Profanity includes "hell," "ass," "Christ," "damn," and "crap."

Lead character makes reference to ghost trying to "get jiggy" with his wife.

Scary and spooky with creepy and grisly images. Talk of the mother of the family in the haunted house having killed herself in a past life, interspersed with a quick shot of a women hanging from a noose. Lots of chases and peril involving ghosts and skeletons, including skeletons chasing children. Kids are put into a chest by a ghost. Frequent demonic noises.

The importance of making your family a greater priority than career.

The movie is based on a theme park ride.

Characters drink tiki drinks in a Polynesian-themed bar. Alcohol drinking at dinner, but no one acts drunk. Cigar smoking.