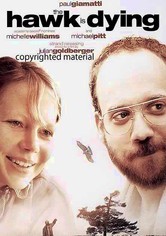 2006 NR 1h 46m DVD
Auto upholsterer George Gattling (Paul Giamatti) searches for meaning in his life in Julian Goldberger's moving drama. An amateur falconer with a questionable track record, George manages to catch a magnificent hawk and is determined to train the wild bird, despite negative comments from his friends and family. Driven to succeed, Gattling refuses to give up, even in the face of tragic events. Michael Pitt and Michelle Williams co-star.