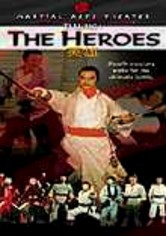 1988 NR 1h 30m DVD
After the destruction of the Shaolin Temple, marshal Kao goes undercover as a lackey for the Ching Empire as he plans the assassination of the Emperor. However, the captured Shaolin students, blinded by rage, are also scheming to kill Kao. Now Kao must complete his plan before being killed by his own secret allies.