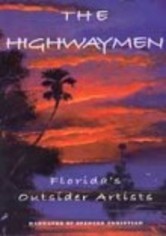 2002 NR 0h 58m DVD
This documentary focuses on a piece of American culture that is rarely spoken of. The Highwaymen tells the tale of a group of young African-American, self-taught landscape artists from central Florida in the late 1950's and early 1960's. In a time of segregation, the men traveled the region selling their detailed paintings from the trunk of their cars. Today, the paintings, originally sold as 'junk art,' are virtually priceless. Narrated by Spencer Christian.