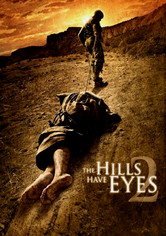 2007 UR 1h 29m DVD
During their final day of desert training, six National Guard recruits (Michael McMillian, Jessica Stroup, Daniella Alonso, Lee Thompson Young, Ben Crowley and Reshad Strik) find themselves up against an army of murderous mutants. They're faced with the ultimate opportunity to put their military skills to the test -- but will they pass? Wes Craven and his son Jonathan co-wrote the script to this sequel to The Hills Have Eyes.

Parents need to know that this mutant-centric horror sequel definitely isn't for kids. The violence is gruesome and sustained, the language is unremitting ("f--k," in all its variations, is a constant), and an ugly rape scene ensures one woman's blind desire for revenge on an especially long-tongued, white-goo-spitting mutant. Weapons include knives, guns, and assorted body-piercing implements (spears, bayonet, poles). The very first scene is a bloody, screaming, gross-out birth (leading to the bare-breasted mother's immediate murder). An early mock battle scene is very fast-paced, aggressively edited, and loud. All assaults by mutants are bloody, gross, and horrible.

Early, grisly birth scene shows mother's breasts; discussion of a romance between a pair of National Guard troops includes sexual slang ("Doing a whole 'nother kind of draining"); assault by one mutant on a woman includes a long tongue lick -- he then inserts his tongue in her mouth (she bites it off, very bloody, and kicks him in crotch). Sexualized violence.

Bloody, close-up, gory, and relentless. National Guard trainees are introduced in a battle simulation shooting, exploding, and facing a suicide bomber; thereafter, bodies are thrown, grabbed, kicked, beaten, dismembered, disemboweled, exploded, shot, stabbed, and shown splatted on the ground. One dying man shows up inside a latrine, his cuts absorbing toxic sewage; heads are smashed, shot, and pierced; weapons include guns, knives, a cleaver, a grenade, dynamite, a bayonet, rocks, and a shovel. Jump scenes in cave; a horrible rape from behind (in shadows, but violence is very harsh and victim's face shows distress); bodies fall or are pulled into holes.

No positive messages to take away.

One character is nicknamed alternately "Private Crackhead" and "Crank."