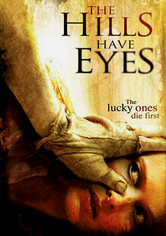 2006 UR 1h 38m DVD
Traveling across the American Southwest en route to California, an unsuspecting suburban family is being tracked by a group of hill dwellers whose social skills have failed to evolve -- and who could attack them at any moment. If their vehicle breaks down, or if they stop to stretch their legs, their vacation could end in tragedy. Kathleen Quinlan, Vinessa Shaw, Emilie de Ravin and Dan Byrd co-star in this remake of the 1977 Wes Craven classic.

Parents need to know that this film is absolutely not for kids. It includes incessant, vicious attacks on a family traveling through the New Mexican desert by a group of mutants. The violence is startling, explicit, and aggressive (dogs are knifed and eviscerated; humans suffer knifing, dismembering, shooting, burning at a stake). Someone bites off a parakeet's head. The monstrous mutants watch their prey through binoculars, which the film renders as spooky "surveillance" imagery. Women appear undressed as monsters try to rape them. Characters smoke, drink beer and margaritas, and refer to "the chronic"/pot. Opening credits sequence features ghastly victims of radiation, in jars and photos.

Bloody, grotesque assaults on traveling family by human mutants; infant in danger (carried off by mutants); dogs yelp off screen and their bloody bodies are discovered by horrified humans; mutants eat human and dog corpses; bird's head bitten off; graphic injuries and body parts (including a bloody head and some deformed heads).Repulsive rape of a young mother, plus repeated sexualized violence.

Frequent profanity, including repeated use of f-words, s-word, "-of-a-bitch."