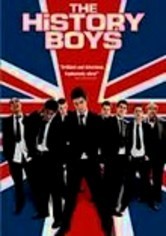 2006 R 1h 52m DVD
Nicholas Hytner, Richard Griffiths and Frances de la Tour reprise their Tony-winning roles in this engaging film version of Alan Bennett's play, chronicling a rowdy group of boys on their way to higher education. On a quest to attend either Oxford or Cambridge, the teens grapple with the intricacies of university entrance exams and admissions, ultimately learning as much about the education system as they do about academics.

Parents need to know that kids, even older teens, probably won't be very interested in this small, talky British film based on Alan Bennett's award-winning play. Several central characters -- both students and teachers -- are homosexual and struggling with their desires. Treated in a mature way, this theme is addressed through clever, occasionally explicit dialogue (but no graphic imagery). The movie doesn't outright condemn the teachers' desire or suggest that the boys are damaged when one awkward instructor regularly "handles their nuts." In one scene, a student takes off his trousers (you see boxers) to act out a skit in class; in another, he's in bed with a female secretary (they're talking, post-sex, no explicit nudity). A fatal traffic accident occurs off-screen, and characters mourn the resulting death. Characters smoke and use "f--k" and strong other language.

Thematic focus on homosexual teachers/students negotiating their interests in each other; a teacher has a propensity for fondling students' "thighs" one student has affair with female secretary (one scene shows them in bed, in underwear); students act out a scene in a bordello to practice French, and one boy drops his pants, showing boxers. Reference to "foreskin" some sexual slang ("wanker," "c--t," "nancy," "balls," "dick"). Characters proposition each other.

Characters lie and cheat to get ahead; students have a decidedly un-hysterical repsonse to a teacher's sexual advances toward them; Muslim student must instruct his peers and teachers what being Muslim means; Jewish student suggests that being Jewish limits his options ("I'm a Jew, I'm small, I live in Sheffield, I'm f--ked"). The boys and their teachers honestly care about each other, but their relationships are complex.

Student smokes cigarettes; students pretend to smoke cigarettes to act out a scene from Now, Voyager; champagne drinking in celebration.