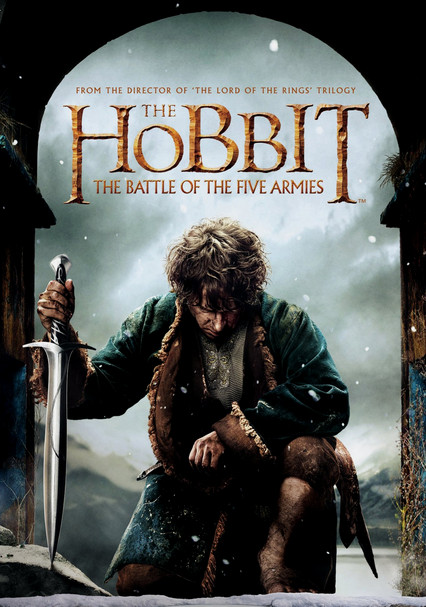 2014 PG-13 2h 24m Blu-ray / DVD
Conjuring up another epic tale, director Peter Jackson unspools the final chapter of the Hobbit saga, with things coming to a head as Bilbo Baggins, Gandalf and the Dwarves at last reach Smaug's lair.

Parents need to know that The Hobbit: The Battle of the Five Armies is the final (and most violent) installment in director Peter Jackson's three-part adaptation of J.R.R. Tolkien's classic fantasy novel -- and, as the title suggests, it features the biggest battle sequences of the trilogy. The most like The Lord of the Rings, this finale is all about epic confrontations: between Thorin Oakenshield who has finally reclaimed the mountain kingdom of Erebor for the dwarves, the elves and humans who want their rightful share of his treasure, and Sauron's orc army that's a threat to them all. This movie has the highest body count in the trilogy; all of the armies sustain losses, and many characters -- primary, secondary, and extras -- die, either in battle (via arrows, axes, swords) or from dragon fire. Some of the death scenes are brutal and particularly sad or disturbing, but ultimately this is a must-see for any family that has already seen the first two Hobbit films.

Kili and Tauriel continue their lingering looks and charged moments of connection, including an embrace, an "almost kiss," and a heartbreaking declaration of love. Legolas loves Tauriel, even if she doesn't return his romantic affection.

The most violent of the Hobbit films: Huge battles with high body counts and brutal deaths. Many beloved characters die fighting their enemies (usually with swords and arrows), as do villains. Smaug kills countless residents of Lake Town as he murderously destroys it, setting fire to anything and anyone in his flight path. Some frightening, jump-worthy moments include Smaug cruelly targeting a man's young son (the dragon doesn't have a chance to kill him), the super Orcs battling the dwarves, Thorin threatening Bilbo, and the elves/wizards fighting the shadow of Sauron. Lots of intense, deadly confrontations between characters.

Even the smallest can be strong -- and the weak, brave. Reinforces the importance of keeping your word/promise/oath and of helping those in need rather than believing it's not your problem. Thorin's obsession with his treasure shows the corrupting power of wealth. As someone says in the movie, the world would be a merrier place if people valued other people above gold.

No product placements in the film, but the Tolkien books and Peter Jackson film adaptations have plenty of tie-ins to merchandise: apparel, video games, Lego toys and board games, role-playing games and costumes, special editions of the books, electronics accessories, posters and other home accessories, and more.

Gandalf smokes a pipe more than once.