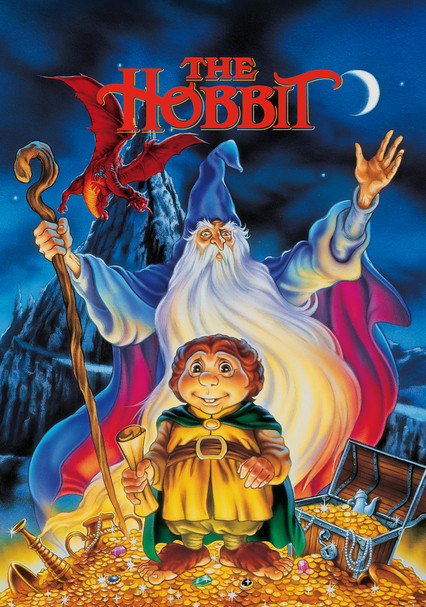 1977 NR 1h 17m DVD
Humble hobbit Bilbo Baggins's quiet life changes forever when wizard Gandalf and a band of dwarves employ him on a quest for treasure. Throughout his long journey, Bilbo battles goblins, trolls, a dragon and the brooding Gollum.

Parents need to know that this adaptation of J.R.R. Tolkien's YA-novel favorite has cartoon violence in battle scenes. There is a village-destroying dragon, predatory giant spiders, and discreet fatalities; sometimes dead bodies are shown in the distance. Sympathetic characters do die after a climactic battle. Students assigned to read The Hobbit in school might be tempted to use this faithful adaptation as a shortcut. This is not to be confused with a super-sized, live-action Hobbit later directed by Peter Jackson.

Combat and dragon fire kills men, monsters, and "wargs" (wolves), with much of it depicted bloodlessly and unrealistically (some creatures, fatally hit by spells and swords, simply whirl around in a kaleidoscopic camera trick). Dead bodies of men and creatures distantly shown. Trolls, giant spiders, and Gollum threaten to eat the main characters. Threatening creatures turn to stone.

An underestimated hero, the humble hobbit overcomes a meek nature and dislike of discomfort to become a courageous warrior-adventurer (if only just this once). Futility of greed and war demonstrated by the armies of different races clashing.

Hobbits and Gandalf like to smoke pipes. The wood elves get drunk on wine.