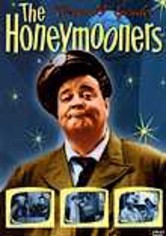 1955 NR 5 discs
The magic of "The Honeymooners" is captured in this special edition. Catch all 39 stand-alone episodes that ran from 1955-56, grouped by theme and showcasing the lightning-quick repartee and on-screen chemistry that made Ralph (Jackie Gleason) and Alice (Audrey Meadows) Kramden one of the most compelling sitcom partnerships of all time. Art Carney (as Ralph's sidekick, Ed) and Joyce Randolph co-star.

Parents need to know that this classic comedy about two working-class married couples is pretty tame compared to modern incarnations. That said, there's some not-so-subtle sexism that should warrant a little discussion, particularly when it comes to the way Ralph talks to his wife and threatens her with violence, however empty those threats may be. A few episodes involve smoking or drinking, but they're typically played for comedy.

The show focuses more on the tumultuous friendship between two working-class men than on the men's relationships with their wives. But there are plenty of scenes that suggest married life is less than blissful. Ralph's catchphrase -- funny as it was in its era -- is a threat of domestic violence, which is no longer considered appropriate for humor.