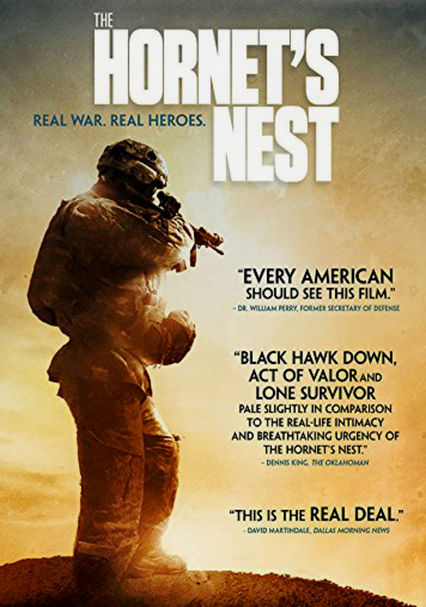 Parents need to know that The Hornet's Nest is a documentary about the war in Afghanistan. It centers on a veteran embedded journalist and his son and follows several soldiers into dangerous situations. No real blood or death is shown on camera, but there's frequent shooting and several explosions, and several real-life soldiers die. Language is an issue, with frequent use of strong words like "f--k," "s--t," and "bitch." Though the movie is powerful, it's not outraged or political. It's very emotional, focusing on the father-son relationship and soldiers' reactions to situations they've been in. The movie doesn't make war look good, but it does make the bonding of soldiers look appealing.

No blood or gore is shown, but many real-life soldiers die in battle, though never actually on camera. Weapons and explosives are everywhere, and there's frequent shooting, plus some explosions. In one scene, viewers learn about a suicide bomber who killed several children.

The movie emphasizes family and comradeship, with people working together and caring about one another and putting a high price on death. The movie doesn't make war look good, but it does make the bonding of soldiers look appealing.

Father and son are shown smoking in one scene (the father a cigar, the son a cigarette). The son, Carlos, admits that he smokes too much.