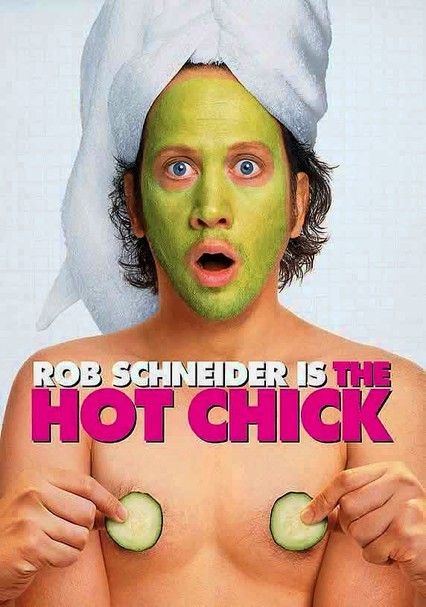 2002 PG-13 1h 44m DVD
Cheerleader Jessica Spencer is as shallow and spiteful as she is pretty and popular. Her cruel nature gets her in trouble when she shoplifts a cursed pair of earrings and winds up trapped in the body of a 30-year-old male loser.

Parents need to know that The Hot Chick includes extremely explicit and offensive humor in just about every category. There are "jokes" about anorexia, pedophile priests, erections, cross-dressing boys, homosexuality, and race. Potential messages about acceptance and maturation are forsaken for cheap and easy attempts at humor. Teens drink in a dance club, and later, drink at a strip club. In the dialogue, there is strong sexual content, as parents openly discuss their sex lives, and in one scene, a mother makes sexual advances on a "Mexican gardener" who is actually her daughter. The content oftentimes feels more R-rated than PG-13; but even for older teens, there isn't anything of merit in this pointlessly crass and tritely formulaic attempt at "comedy."

Early in the film, characters use their sexuality to take advantage of people and situations. When a cheerleader becomes a thirty-year-old man, her best friend demands to see "her" penis. When the cheerleader calls her boyfriend and sounds like a man and says she regrets not being more affectionate, her boyfriend thinks it's a priest calling. While posing as a male Mexican gardener, the cheerleader listens as her father tells her about his sex life; later, the cheerleader's mother makes a pass at "her." A father is shown in bed reading Playboy magazine, then tilting the magazine sideways to look at the centerfold.

Comic violence. A janitor in a mall drives into a post with his vehicle while distractedly staring at a pretty teenage girl on an escalator. Security guards in a mall tackle a teenage girl after she sets off a security alarm. A man falls down metal bleachers after being pepper sprayed in the face by a teenage girl; he is shown falling on his face. A girl who has transformed into a man gets into a pillow fight with her best friends; with her newfound strength, the force of her pillow swings sends her friends airborne and crashing into walls, knocking them out. Characters get into a bar fight, culminating in kicks to the shins and groin.

Frequent profanity. "Ass." "Asshole." "B---h." "Dicking around." The word "gay" is frequently thrown around in a negative connotation. Characters call each other "sluts" and "skank hos." Towards the end of the film, a Korean mother, dressed in the manner of a hip hop performer, says to her half-Korean, half-African American daughter, "N----r please." A father, to who he believes is his Mexican gardener, lowers his pants to reveal his "pornstar trim." Early in the film, a teen girl insults another teen girl by making an anorexia joke. Jokes and sight gags regarding periods, and male urination. A man's rear end is shown twice.

Any potential for positive messages in this movie are avoided in favor of crass humor often at the expense of those who are "different."

After transforming into a thirty-year-old man, a cheerleader is shown using several bottles of clearly-marked Secret Deodorant.

At the beginning of the film, and appearing intermittently for the rest, the SNL sketch with the punch line "you can put your weed in it" is brought back to life. Teens drink at a dance club, and are later shown drinking at a strip club. A agitated mother puts whiskey in her coffee, and later abuses prescription drugs. The lead character orders several drinks at a dance club. A thirty-year-old man who has switched into a teenage girl's body lights a cigarette and starts to smoke before the cigarette is yanked from her mouth.