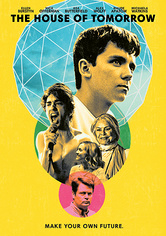 2018 NR 1h 25m DVD
16-year-old Sebastian has spent most of his life with his Nana in their geodesic dome home, where she raises him on the futurist teachings of her former mentor Buckminster Fuller. But he begins sneaking around with Jared, a chain-smoking, punk-obsessed teen with a heart transplant who lives with his bible-banging single father and teenage sister, Meredith. Sebastian and Jared form a band and Sebastian must decide if he wants to become the next Buckminster Fuller, the next Sid Vicious, or something else entirely.

Genres
Drama, Indie Dramas, Dramas Based on the Book, Coming of Age