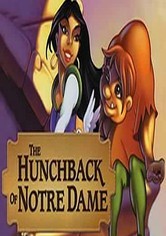 2003 NR 0h 45m DVD
This animated adaptation of the classic Victor Hugo novel centers on Quasimodo, the disfigured bell ringer of the majestic Notre Dame Cathedral in 17th century Paris. Mocked widely as a fool, Quasimodo finds little humanity in the world around him ... until a young gypsy woman named Esmeralda brings him water when he's locked in the stocks in a public square. From her act of kindness grows a long-lasting friendship.