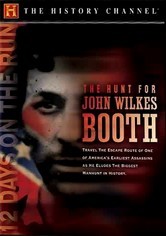 2007 NR 1h 34m DVD
Discover the whole shocking story behind the search for the man who shot President Abraham Lincoln. For nearly two weeks after the shooting at Ford's Theatre, John Wilkes Booth was hunted by more than 10,000 troops and lawmen. Through dramatic reenactments, this film details the assassin's escape, his twisted original plan of murder and the explosive showdown that ended one of biggest manhunts in history.