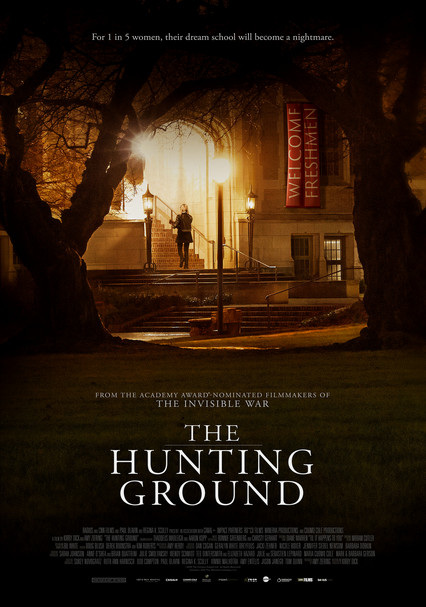 2015 PG-13 1h 42m DVD
Focusing on the epidemic of sexual assaults at U.S. colleges, this often-harrowing documentary combines the recollections of victims with disturbing statistics demonstrating the depth of the problem, while officials continue to downplay the issue.

Parents need to know that The Hunting Ground is a searing documentary that examines the epidemic of sexual violence on college campuses. Women (and a few men) detail their horrific experiences -- and their schools' incredibly, frustratingly tepid responses. The stories are detailed and graphic and often hard to hear. Any girl in college or nearing college age would do well to watch this, as should parents of both teen girls and boys. In addition to the pervasive topic of sexual violence, there's some brief profanity ("s--t" and "bitch") and many scenes showing college students getting drunk at parties, as well as references to victims being drugged.

The entire film is about an epidemic of violent rape at colleges all across the country. We don't see any of the attacks, but many women share detailed, harrowing, and disturbing stories of violence. And what's even more disturbing is that there are so many women who've had very similar experiences. Some scenes include hateful images, including written threats and insults aimed at women who've spoken up about being assaulted.

Occasional swearing, including "s--t" and "bitch."

The filmmakers are trying to shine a bright light on an issue that many colleges would prefer to sweep under the carpet, bringing it to the public's attention so that it can be addressed.

Dozens of well-known universities are mentioned by name, but it's hardly in a promotional way, as all of the stories involving them are about how the administrations failed to help assault victims.

Several scenes show college students drinking at bars, parties, and athletic events, and some of them are clearly quite drunk when they share their opinions with the camera. Many women share stories about being drugged and then assaulted or how they were taken advantage of when they were drunk. As one person explains, "alcohol is a weapon."