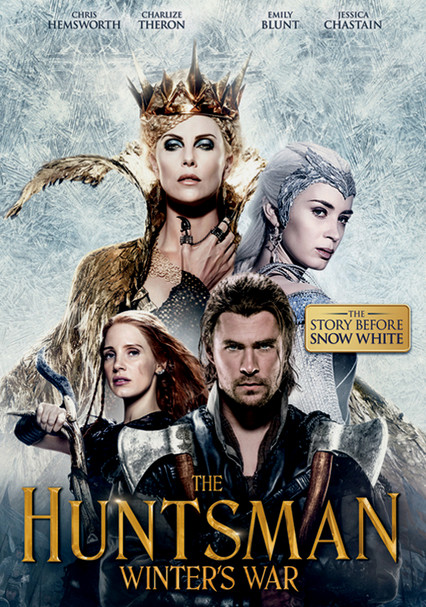 2016 PG-13 1h 54m Blu-ray / DVD
This prequel to "Snow White and the Huntsman" returns to the fairy-tale fantasy world created by the Brothers Grimm, centering on the lives of Ravenna and the Huntsman before the appearance of Snow White.

Parents need to know that The Huntsman: Winter's War is both a prequel and sequel to Snow White and the Huntsman, following the origin story of how Eric (Chris Hemsworth) became a huntsman. Like its predecessor, the film is violent and dark, despite the fairytale references and themes. Kids may think it's going to be like the hit TV show Once Upon a Time, but the movie has intense scenes like an infant's death, startling betrayals, and many deaths (though only a few are shown up close). Both queens (played by Emily Blunt and Charlize Theron) kill, albeit in different ways, and there are scary, horned, ape-like goblins that pursue and nearly kill the protagonists. While there's little in the way of language or drinking, there are two sensuous-but-not-graphic love scenes -- expect to see kissing and bare shoulders/backs.

Ravenna plays footsie with her husband. Eric and Sara share intense gazes, kiss passionately, and make love more than once; in one scene, they're naked in a hot spring (bare shoulders, backs shown as they kiss, and in another, they undress each other while lying down (bare backs visible, side view of him on top of her).

Both queens kill people in many different ways. A baby is burned to death in her crib. Ravenna can summon tar-filled death rays, while Freya commands ice to do her bidding -- like freeze people into a state of suspended animation or freeze and shatter them into pieces. The huntsmen army kills in battle. The goblins are large, horned, ape-like creatures that scarily scream and attack humans.

Love can be enduring and powerful, not fleeting and fair-weathered. Also messages about teamwork, friendship, and the real meaning of family, and the story explores how jealousy can corrupt.

The huntsman and the dwarves have a drink at a pub.