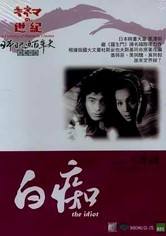 1951 NR 2h 46m DVD
Masayuki Mori stars as Kinji Kameda, a war veteran who was sentenced to death and then pardoned, in Akira Kurosawa's adaptation of the novel by Fyodor Dostoyevsky, which relocates the story from Russia to the snow-covered island of Hokkaido, Japan. Recently released from an asylum, the fragile Kameda descends further into madness when he becomes entangled with two women (Setsuko Hara and Yoshiko Kuga) and an old friend (Toshirô Mifune).