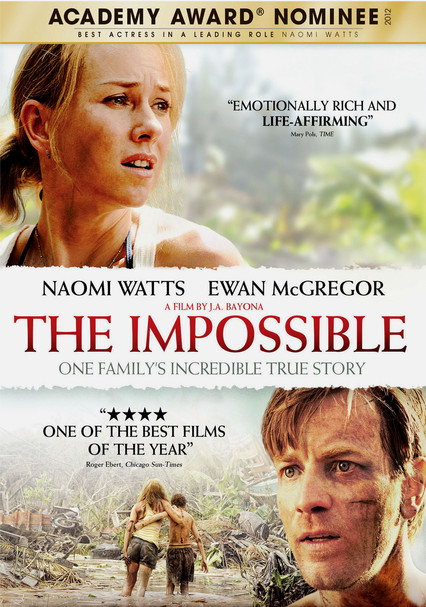 2012 PG-13 1h 54m Blu-ray / DVD
Tracking one family's harrowing experiences, this gripping drama depicts the chaos generated by the massive 2004 tsunami in Southeast Asia. On December 26, Maria, Henry and their sons are vacationing in Thailand when unthinkable disaster strikes.

Parents need to know that The Impossible is an intense family drama set against the 2004 Asian tsunami. Because of the subject matter, there are many upsetting sequences, particularly in the first half hour after the tsunami hits. People are shown swept away and presumably killed by the rushing wall of water, and a mother is so severely injured that a part of her skin is no longer attached to her body. Parents, please know that you, too, will be affected by the horrors depicted in the film -- none greater than when a boy believes he's all that's left of his immediate family.

Adults at the resort kiss and dance and embrace. There's nudity, but in a completely asexual way. The mom, who was wearing a bathing suit when the tsunami struck, doesn't realize her breast is exposed until her son mentions it.

The devastation the tsunami causes is catastrophic. People are swept away in a wall of water, drowned or impaled or crushed by debris. Maria is seriously injured as her body makes impact in the rush of water. At one point, she's incredibly bloody and has a large flap of skin hanging off of her leg. People taken to the hospital are grieving the loss of their loved ones. Kids and teens will especially feel for Lucas, who at one point believes his mother is dead. Both Maria and Henry think the other has died. A tween yells at his mother a few times.

Ultimately, The Impossible is a story of a mother and son's devotion to each other after the unthinkable has happened. The movie reinforces the random way that natural disasters cause destruction. There's no reason some people survive and others perish; it's a terrible tragedy with unthinkable consequences. But throughout the calamity, people show each other extraordinary kindness and generosity, sending the message that even in times of despair, there are moments of hope and small miracles to celebrate.

Grown-ups drink at the hotel bar and a dinner party.