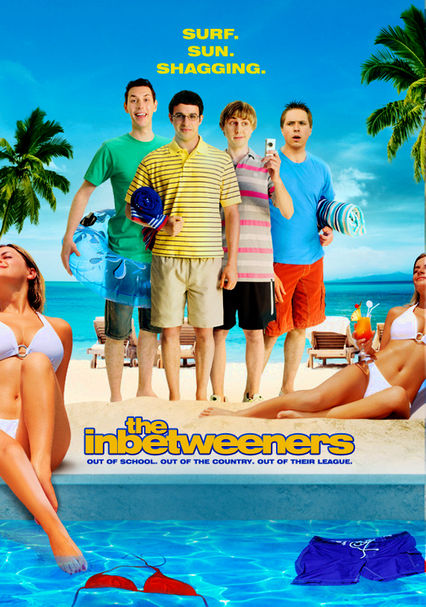 2011 R 1h 37m DVD
In this coming-of-age comedy that picks up where the popular series left off, Will, Simon, Jay and Neil go on holiday to Crete after a series of unfortunate events unfolds during their final week at Rudge Park Comprehensive.

Parents need to know that The Inbetweeners Movie is a British comedy based on a successful TV series. There's tons of scatological humor and sexual content as four recent high school graduates go on vacation in Crete with the main goal of getting drunk and meeting women. There's brief full-frontal male nudity, kissing, and sexual situations, as well as constant sex talk, innuendo, and language ("f--k," "s--t," "p---y," and other offensive slang words). The friends fight a bit among themselves, a bully picks on them, and one friend attacks a young boy who's bothering him. Drinking is also an issue; though the actors are clearly much older, they're intended to be playing 18-year-olds and are seen drinking, drunk, throwing up, and passing out.

Several occurrences of brief full-frontal male nudity. One character, a nightclub performer, can apparently do "self-fellatio." One female character is seen naked from behind. Male and female characters remove their clothes fairly often, but in most cases, nothing is actually shown. One character is seen "sexy" dancing with various older women, burying his face in cleavage, and with his hand inside women's underwear. A character begins an Internet sex session that's interrupted. Many characters are seen kissing or in various acts of foreplay. Characters have sex on the brain throughout; the movie is loaded with wall-to-wall sex talk, innuendo, and images (like drawings of penises).

Two of the friends fight in one scene, though it turns into a pathetic sort of grappling rather than anything violent. A bully picks on the heroes in various scenes; in one, he shoves one of the heroes and puts hands on his neck. One of the main characters attacks a young boy who's bothering him. Some arguing, shouting, etc.

After a two-week vacation filled with over-the-top behavior, the characters learn tolerance and empathy toward one another and others. That said, there are also many jokes at the expense of often-targeted groups, including overweight people, older women, and even little people.

One quick shot of a Kellogg's Frosted Flakes box.

Though the actors are clearly older, they're playing high school graduates of about 18. They drink almost constantly throughout the movie. Many characters are shown drunk, passed out, or throwing up. One character, a bully, is shown snorting cocaine.