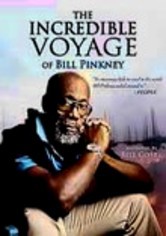 1994 NR 0h 45m DVD
From Boston to Bermuda, the British Virgin Islands, Brazil, South Africa, Tasmania, Uruguay and then back, Bill Pinkney became the first African-American to sail solo around the world -- a journey chronicled in this Bill Cosby-narrated documentary. Communicating with schoolchildren in Boston and Chicago throughout his adventure, Pinkney offers inspiration through his story of commitment, courage, education and perseverance on the high seas.