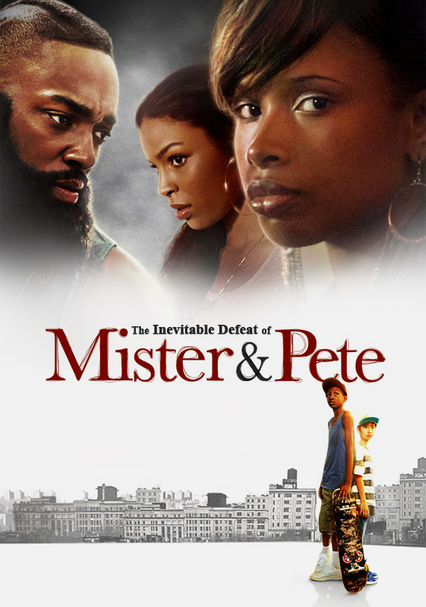 2013 R 1h 48m DVD
When his mother is arrested for drugs and prostitution, 14-year-old Mister takes charge of 9-year-old runaway Pete and tries to shield them both from protective services. But surviving on the streets of Brooklyn is no easy task.

Parents need to know that The Inevitable Defeat of Mister & Pete is both wrenching and stunning. With heart-aching reality, it chronicles the lives of two kids who suffer from slipshod parenting and live in terrible circumstances. There's drug addiction (an adult shoots up right in front of her son and his friend), violence (children are assaulted, and a drug dealer rules the neighborhood with menace; though viewers don't see a lot of brutality, they feel it), and crushing neglect, all of which might prove intense and difficult to process for young teens and tweens. Expect strong, frequent swearing by both adults and kids (including plenty of "f--k"s and "s--t"s) and a scene that, though the participants aren't fully seen, depicts oral sex that's witnessed by a child.

A woman is shown performing (implied) oral sex; there's no nudity (in fact, only her feet are shown), but it's clear what she's doing, and a child witnesses it. Discussion about how some female characters are prostitutes.

Pervasive, with a sense of danger that threads throughout the film. A child finds a gun and fires it accidentally. A teen beats up a child with his shoe. An adult chokes a child until he almost passes out.

Strong and very frequent from beginning to end. Both children and adults curse, including "s--t," "a--hole," and "f--k." Also the "N" word.

Children are resilient, especially Mister and Pete -- but their resilience is put to the ultimate test here. Also, a lost soul can still find its way, given the help and will to change.

A woman shoots up in front of children. Viewers don't see blood, but the syringe and other paraphernalia are visible as she prepares to get high. Talk of drug dealing in the neighborhood. Some peripheral characters seem high.