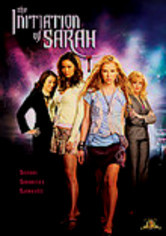 2006 NR 1h 30m DVD
Sarah's (Mika Boorem) mysterious powers have always been a bone of contention between her and her non-magical twin, Lindsey (Summer Glau). And that friction only heats up when the two pledge sororities and find themselves drawn into an ancient battle between good and evil. Soon, the sisters are locked in a fight for their lives that threatens to drive them apart -- or worse -- in this spine-chilling thriller.

Parents need to know that this revamped remake of a 1978 TV horror flick comes with a "viewer discretion" warning for good reason. The plot's eerie focus on witchcraft and human sacrifice (for the continued existence of evil witches) mixed with disturbing scenes of victims begging for their lives as they're chained to a sacrificial table is too much for kids -- even some younger teens. Violence is prevalent and includes two stabbings, some attempted strangulations (from afar, by magic), a fire started in a dorm room, and a few spell-casting exchanges. And if that's not enough, most of the characters are superficial, conniving coeds who see being in a "good" sorority as the ticket to their eternal popularity -- which seems to be the main purpose of their college life.

Superficial comments like "he's a hottie," lots of flirting, ogling at females' breasts, kissing scenes, and talk of whether a character is a virgin is common fare. A few scenes imply that sex is to come or has just finished (with some post-coital re-dressing), though there's no nudity.

With few exceptions, the female characters (including one of the two adults) are obsessed with appearance and popularity. The sorority life is cast in a strongly negative light, suggesting that each group has a secret motive in its recruitment and recruits only girls who fit pre-determined criteria. Manipulation and trickery run rampant, even turning sisters against one another. Girls dress and act provocatively to influence boys' actions. Only one character enjoys a friendship based on a truly personal connection.

In one scene, an underage student downs a beer in his dorm room.