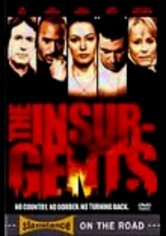 2006 R 1h 25m DVD
Three Americans -- a former soldier (Henry Simmons), an ex-prostitute (Juliette Marquis) and a small-time thief (Michael Mosley) -- gravitate to Robert (John Shea), a magnetic and outspoken author. Under his guidance, the group becomes a homegrown terrorist cell. Disillusioned by the post-Sept. 11 world, they plot their own brand of change, which will leave thousands dead. Mary Stuart Masterson co-stars in this chilling award-winning drama.