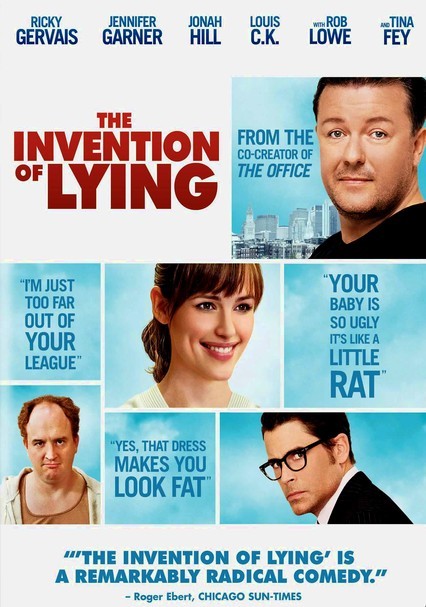 2009 PG-13 1h 39m Blu-ray / DVD
In a world where no one fibs, fiction doesn't exist and people take each other at their literal word, unsuccessful screenwriter Mark gains fame and fortune -- and maybe the girl of his dreams -- by saying things that aren't true.

Parents need to know that The Invention of Lying is, like most of star Ricky Gervais' humor, irreverent and edgy (though also thought provoking). Nothing is sacred -- including religion (in the movie, the concept of God, aka "The Man in the Sky," is one of the lies that the main character invents). There's no sex on screen, but there's lots of talk about it -- including masturbation references, propositions, use of words like "boobies," etc. Expect a fair bit of salty language, from name-calling ("prick," "bastard," "faggot," "manbitch") to infrequent use of "f--k" and "s--t." Characters drink beer, wine, champagne, and whiskey; there's some drunkenness, and a man is shown driving while intoxicated. Lots of commercial products are shown on screen, with some showing up in scene after scene.

A law enforcement officer roughly pulls a driver out of a car. Some boys pick on an overweight child and push an ice cream cone in his face.

Although the movie is all about introducing the concept of lying to the world, the end take-away is that the world can be a bleak place if you don't have faith in yourself and in the future. The movie also makes the point that it isn't necessary to say everything you think -- that there are times when telling the truth can be hurtful and unkind. A relationship based on outward appearances and superficial qualities ultimately proves to be unsatisfying and demeaning.

Plenty of in-your-face product placement throughout: Characters drink Budweiser beer in many scenes; other brands/products include Moet Champagne, Craigslist, and Pizza Hut. Coca Cola and Pepsi Cola advertisements are parodied in several sequences.

Alcoholic beverages are consumed in many scenes: wine, champagne, whiskey. Beer drinking is particularly pervasive. In some sequences, drinking is used to self-medicate for depression and hopelessness. Two characters are shown getting drunk in a bar; one then drives a car unsteadily, weaving across the road for comic effect. One character declares that he's spent the night "throwing up pain killers," while another refers to his own "cocaine habit."