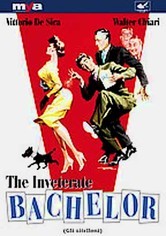 1958 NR 1h 38m DVD
Despite an ominous warning from his mentor -- a confirmed bachelor (Vittorio De Sica) -- young Marcello (Walter Chiari) weds the girl of his dreams (María Luz Galicia), only to discover that matrimony can drive a man to murder. Directed by Giorgio Bianchi, this comic import became a lightning rod for controversy in 1958 when Italian censors banned the film because of its negative depiction of marriage.