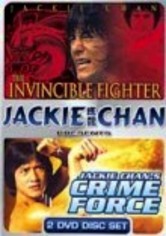 1996 NR 1h 35m DVD
This high-kicking compilation strings together some of the most memorable fight scenes from Jackie Chan's early films with director-producer Wei Lo, including Shaolin Wooden Men, Snake and Crane Arts of Shaolin, Dragon Fist and Fearless Hyena. Chan first partnered with Wei Lo on the 1976 film New Fist of Fury and went on to appear in many more of the director's martial arts classics throughout the 1970s.