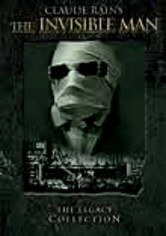 1940 NR 2h 33m DVD
In his first horror movie, The Invisible Man Returns, Vincent Price stars as the titular gent you can "see right through" when he goes undercover to clear his name of a murder charge. Costars Cedric Hardwicke; Joe May directs. In The Invisible Woman, a nutty professor (John Barrymore) transforms a model (Virginia Bruce) into an invisible woman, and that gets the mob interested! Contains great comedy gags directed by A. Edward Sutherland.

Director
Joe May, A. Edward Sutherland