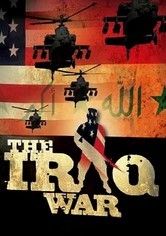 2008 NR 2 discs
This series of programs from the History Channel explores various aspects of the Iraq War, investigating the conflict from both political and military perspectives. Interviews with politicians, journalists and military experts shed light on the controversial war, and weapons used for the first time -- such as the F-117 Nighthawk stealth fighter, B-2 Spirit stealth bomber and Stryker combat vehicles -- are examined.