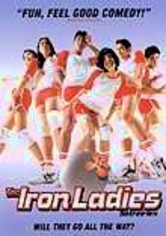 2001 NR 1h 44m DVD
Recounting how a volleyball team composed of transvestite gays and one transsexual competed in the 1996 national championships, this Thai comedy brings the issue of male effeminacy into a new light -- even while entertaining us in the "old" one. Based on a true story, the film captured the Audience Award for Best Feature at both the San Francisco and New York 2001 Lesbian and Gay Film Festivals.