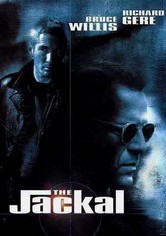 1997 R 2h 5m DVD
A triumvirate of stars forms the core of this update of the 1973 spy thriller The Day of the Jackal that has Bruce Willis portraying the shadowy assassin of the title. Hired by a powerful member of the Russian mafia to avenge an FBI sting that left his brother dead, the perfectionist Jackal proves an elusive target for the men charged with the task of bringing him down: a deputy FBI boss (Sidney Poitier) and a former IRA terrorist (Richard Gere).